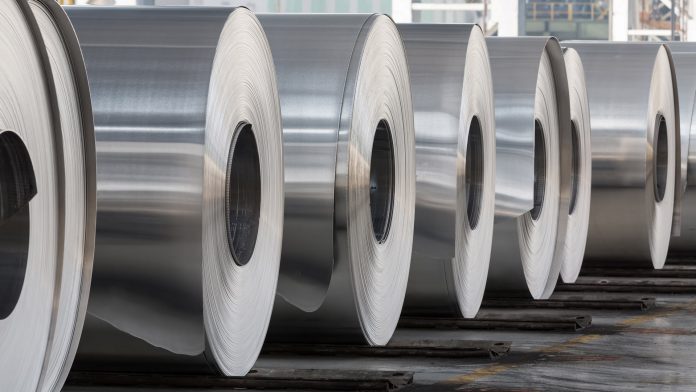 Price inflation has been a major concern since the economy roared back from coronavirus a year ago. While the trend has been difficult for the public, some companies have benefited from the trend. That’s especially true with January’s mystery stock.

Its story begins 1-1/2 centuries ago in northern Ohio, when Charles Martin Hall learned to read from a chemistry textbook. The home-schooled son of Christian missionaries was fascinated with scientific experiments, especially metals. The steel industry had already taken off, thanks to Henry Bessemer’s invention of the blast furnace 20 years before.

Hall turned his attention to aluminum, then rarely used. The problem, unlike iron or copper, was isolating the metal from other elements. European scientists had struggled with the problem for decades before Hall mixed aluminum oxide (alumina) with a mineral bath of cryolite and then zapped it with electricity. He filed a patent for the electrolysis-based process in 1886.

Hall soon moved to Pittsburgh, then the metal capital of America, in search of backers. He founded the Pittsburg Reduction Company in 1888 with help from industry veteran Alfred Hunt.

Hydroelectric turbines were the main source of power at the time, so facilities had to be near rivers. The first big plant was in New Kensington, Pennsylvania, about 20 miles east of Pittsburg on the Allegheny River. It next expanded to the Niagara Falls area and St. Lawrence River valley.

Aluminum was different than metals like steel and copper because it was virtually unused before the modern age. Businessmen were initially reluctant to something so new, but they found applications as mass production brought prices down. Eyeglass frames and cookware came first. Inventors soon mixed it with other metals to improve strength and flexibility.

The rise of aviation during WWI created an entirely new market, which drove global growth of the industry. The Empire State Building in 1929 featured an aluminum exterior. It gained even more use after WWII thanks to space travel and the invention of the aluminum can in 1957. (Previously, beer was sold in steel cans and soda was bottled.)

Our mystery stock, now known as Aluminum Company of America, had just been added to the Dow Jones Industrial Average. It remained in the key benchmark for almost five decades. The stock remained in a solid uptrend in the postwar era, climbing from under $4 (split adjusted) in January 1975 to $95 in early 2001. It then entered a long period of sideways movement before plummeting along with the rest of the stock market in late 2008.

Alcoa (AA) was rangebound after the crash, swinging wildly but remaining mostly below $40. This was a difficult time for metal stocks after the previous decade’s commodity boom. Other big names like U.S. Steel (X) and Freeport McMoRan (FCX) also remained far below their previous peaks. By 2013, the company had lost its place in the Dow Jones Industrial Average as Nike (NKE) and Goldman Sachs (GS) joined.

AA spent those years rationalizing its business as the industry dealt with excess capacity. It spun off its fabrication business, which makes products like auto parts and aircraft components, into the new company Arconic (ARNC) in 2016. The breakup cut the company’s size in half.

Executives responded with a 1-for-3 reverse stock split to lift its share price, but times remained difficult. It rebounded as the stock market cruised to new highs in 2017, but rolled over as metals prices dropped in 2018 and 2019. Then coronavirus hit, hammering AA back to levels last seen during the presidency of Gerald Ford.

It took several months for the stock to turn, even with aluminum prices bottoming in May 2020. Management cut production early in the pandemic and focused on preserving cash. The first rays of sunlight came in July 2020, when AA hiked its guidance and analysts anticipated a turn in the market.

However there was still plenty of uncertainty — especially from Washington. First, the White House threatened to increase tariffs on imported aluminum. Second, politicians continuously bickered over an infrastructure stimulus bill.

Market forces gradually took over as a recovery in demand and tight supplies lifted metal prices. That inspired a key upgrade from Bank of America upgrade in September, followed by another strong quarterly report the next month. The really important news — the coronavirus vaccine — hit on November 9, 2020. Investors shifted to stocks that could benefit from the coming economic boom, and AA was near the top of their list. Its shares proceeded to double by late January 2021.

After a brief pullback, the rally intensified as broader macro conditions improved and management took key strategic actions. Aluminum prices continued to surge, and reached a 13-year high by the summer. Management gradually brought smelters back on line, while shedding $1 billion of non-core assets. Analysts at big Wall Street firms like Morgan Stanley and Goldman Sachs turned bullish. The company also cleaned up its balance sheet by paying down debt and transferring about $1.5 billion of pension liabilities to third-party annuities.

AA continued to report strong earnings, bouncing higher along its 100-day moving average for all of last year. It got another boost in December when S&P Dow Jones Indices added the stock to the S&P MidCap 400 index. By Christmas break it was back to the highest levels since October 2008, having gained 150 percent from the start of the year.

Up next? Earnings are due after the closing bell on Wednesday, January 19.

In conclusion, AA has taken a wild ride in the last five years. It suffered weakness in commodities immediately before coronavirus, then crashed as the economy halted. But longer-term improvements were taking shape beneath the surface. That makes it similar to other names like United Parcel Service (UPS), Ford Motor (F) and Avis Budget (CAR).

The Federal Reserve Meets Next Week. Is a Squeeze Coming in...