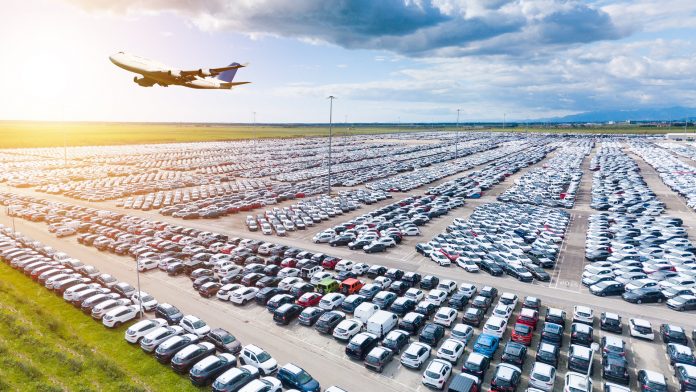 Few industries crashed harder than travel stocks during the pandemic. However one company benefited from the crisis as an unexpected set of catalysts drove its shares up more than 1,700 percent from the 2020 lows.

The story of this month’s mystery stock begins in 1946 when a former WWII bomber pilot got tired of hailing taxis after flights. Unlike the first car-rental service, Hertz, he envisioned a new kind of agency focused on airports. The first two locations were at Willow Run Airport near Detroit and Miami International airport.

Twelve years later and 2,200 miles away, another Air Force veteran decided to undercut the competition with low prices. Morris Mirkin started Budget Rent a Car with 10 vehicles in Los Angeles, and it soon flourished. The company quickly went global and relocated to Chicago.

By that time, Warren Avis had already sold his firm to a conglomerate called Amoskeag. It was the first of several deals that would see Avis Car Rental bounce between investment firms, food processors, automakers and retirement plans.

By 1996 the company was under the control of HFS, owner of Days Inn and Super 8. It was a strange mix of businesses, with real estate (Century 21), mortgage servicing (PHH), tax preparation (Jackson Hewitt) and drop shopping (CUC). HFS changed its name to Cendant in 1997 and problems soon emerged.

Fraudulent accounting was discovered the next year. Cendant started unloading businesses to pay off debt, but it still acquired Budget in 2002.

Instead of trying to manage the unwieldy mix of businesses, Cendant decided to break up. Management spun off the hotel business as Wyndham Worldwide, now Wyndham Hotels & Resorts (WH). Century 21 became Realogy (RLGY). Rental cars were the only remaining business, so the existing corporation renamed itself Avis Budget and started trading under the symbol CAR.

The next 10-15 years was relatively uneventful. The stock crashed along with the rest of the market in 2008 and roared back after the financial crisis passed. However the share price stalled at its late 1990s high around $64. Ride-sharing firms like Uber Technologies (UBER) appeared, and CAR began a long slide. Its best days seemed to be in the rearview mirror.

Then coronavirus came along, hammering CAR to $6.35 in March 2020. That was its lowest price in over a decade. Its shares struggled for a couple more months, but management slashed expenses, renegotiated credit lines and stopped buying new vehicles. Things started improving in June. The following month, analysts started talking about a new trend: used-car inflation.

As most readers know, pre-owned vehicles shot up in value after coronavirus shuttered auto plants. That was an unexpected boon for a company sitting on 560,000 cars.

CAR’s assets gained value, while lower interest rates let management refinance debt at lower cost. This was a highly unusual and unexpected positive in the midst of an economic crisis. Traders who positioned against the stock thinking it would crash because the pandemic were forced to buy shares. By early this year, a short squeeze was underway.

CAR put bankruptcy fears to rest in February 2021 by announcing it had $1.3 billion of liquidity. Its shares broke out to new all-time highs the following month.

Management continued to mend the business and take advantage of the new operating environment. Ride-sharing firms like UBER were struggling, but rental cars were in tight supply and prices were rising. Debt was rolled out years into the future and cash flows hit records by the end of June. The next set of numbers in August also saw book value turn positive for the first time in at least five quarters.

CAR initially fell but soon recovered. On September 16, Bank of America gushed about the strong pricing and positive supply/demand balance. The analyst said Wall Street didn’t appreciate its ability for “overearning.” The note sent the shares to a new high above $100, and they’ve continued to climb since.

In conclusion, few people probably expected a travel stock could benefit from mass lockdowns. But the pandemic created a series of powerful catalysts, like low interest rates and price inflation. That let CAR repair its balance sheet, increase margins and punish short sellers.

The stock market can be full of surprises.