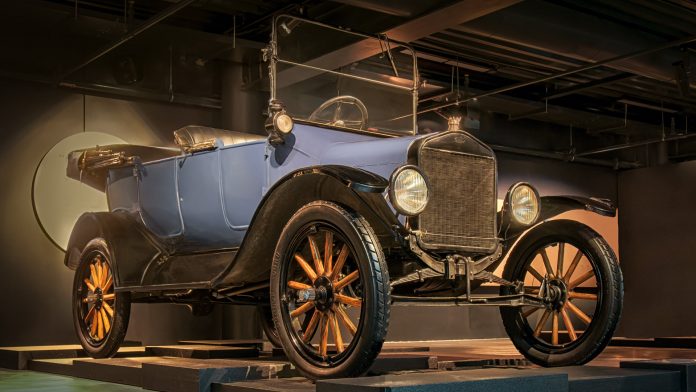 Innovation can be an essential element of success in the stock market. Now one of the earliest major disruptors could be breaking new ground again.

This month’s mystery stock traces its origins to the early-20th century, when automobiles were expensive and hard to manufacture in large numbers. A self-taught mechanic raised on a farm looked to solve the problem with a series of inventions for components like transmissions, axle assemblies and cooling systems.

His biggest breakthrough was inspired by slaughterhouses, where butchers sliced up cows and pigs on a chain-powered line. This innovator turned the method around in 1913 by creating an assembly line, with workers adding parts to cars as they moved along a conveyor belt.

By 1914, Ford Motor (F) was the world’s top automaker. It soon fell behind General Motors (GM), which was better at marketing and pioneered the use of consumer credit. F went public in 1956, six years after Henry Ford died, and spent most of its subsequent history the No. 2 U.S. carmaker behind GM.

Ford in the Fast Lane

Ford has moved into the fast lane since late 2020. The move began as investors shifted back to stocks that would benefit from the economy reopening. However it really started moving this year as CEO Jim Farley shifted the company’s focus toward zero-emission vehicles.

The first big move occurred in January after its investment in electric-truck maker Rivian increased in value. It consolidated for the next several months, and then started moving in the last two weeks. A quick succession of events have electrified the stock.

First, on May 19, F unveiled an all-electric F-150 pickup truck. The next day, it committed to manufacturing batteries and formed a joint venture with SK Innovation. It also considered a spinoff or sale of its Spin electric-scooter business.

May 26 was the big investor day. Management set a high bar by planning to have 40 percent of new vehicles electric by 2030 and hiking planned investment by 36 percent. That won an upgrade from RBC, which launched the stock to a new five-year high above $14. It also made F the second-biggest gainer in the S&P 500 in May, up 26 percent.

The next big event was yesterday, when monthly sales data for May showed EV volumes spiking 184 percent to 10,364 units. Overall sales, however, lagged other automakers as F struggled with chip shortages.

In conclusion, several forces are coming together for the iconic carmaker. First, it’s undergoing a major business transformation. Second, it’s taking some of the enthusiasm from Tesla (TSLA) because it trades at much lower multiples. (Check out this company-by-company comparison with Elon Musk’s firm.) Third, it’s enjoying a big cyclical upturn in the economy as millions of Americans emerge from the coronavirus pandemic.