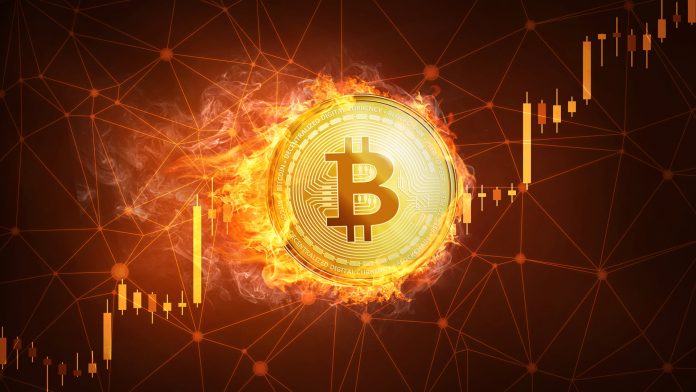 Bitcoin’s popularity is surging as a long-awaited exchange-traded fund launches.

Preliminary analysis from Google Trends showed Bitcoin’s popularity jumping to its highest level in at least five years. It even eclipsed the previous peak from December 2017 when prices neared $20,000.

Now back above $60,000, the cryptocurrency is getting more attention than ever. The new ProShares Bitcoin Strategy ETF (BITO) traded 24.4 million shares its initial day, translating into more than $1 billion in value. Bloomberg analyst Eric Balchunas said that’s a record for the debut of any ETF.

The launch comes at a potentially key time for investors because at least two important things are happening. First, the hottest inflation in more than a decade is eroding the purchasing power of fiat currencies like the U.S. dollar. Second, investors seem to be dumping Treasuries as the Federal Reserve prepares to taper asset purchases. While it’s probably too early to say Bitcoin is replacing Treasuries as a store of value, there are signs people may be starting to think that way.

Take famed value investor Carl Icahn for example. Earlier this week he told CNBC that Bitcoin may become a “store of value if inflation gets rampant.”

Russia is also worried about the long-term value of the U.S. dollar as a store of value. Aleksandr Pankin, deputy minister of foreign affairs, said Moscow may replace the greenback with other currencies “as well as some digital assets.”

There’s also growing interest in Brazil, where lawmakers are working on bill to increase investor protections for virtual assets. While it appears that the measure won’t make Bitcoin legal tender, interest is growing in South America’s largest economy. Its central bank said Brazilians now own about $40 billion of cryptocurrencies.

Treasury bonds fell again yesterday, sending the yield on 10-year note to its highest level since May 21. (Bond yields rise when prices fall.) The increase is taking place as the market begins to suspect that inflation won’t prove “transitory,” as Federal Reserve Chairman Jerome Powell has indicated.

Consider different kinds of price pressures like wages, rents and energy. September’s employment data showed hourly wages up 4.6 percent, the third straight month above 4 percent. It hadn’t run that fast in the previous 13 years of data.

A separate report from CoreLogic showed that rents on single-family houses increased by 9.3 percent in August. Commodities like oil, natural gas, metals and fertilizer have also risen.

Another ingredient in the inflationary story could be the U.S. dollar, which last week hit its highest level in over a year. But now there are signs of investors regaining interest in foreign assets, especially with the Chinese currency rallying. Should the greenback slide from these levels, it could also boost commodity prices and inflation.

Finally, this is happening at a time that coronavirus infections have dropped to three-months low. Meanwhile, data from the Transportation Security Administration shows airline traffic above 2 million in eight of the last 13 days. That stands in sharp contrast with September, which only had five days above 2 million all month. Those indicate the economy is rebounding, which also typically lifts prices and reduces demand for Treasuries.

In conclusion, investors have grown accustomed to a low inflation since about 2011. Now mounting evidence suggests that price increases are more firmly established. Money is shifting away from traditional stores of value like Treasuries at the very same time that Bitcoin has reached a bigger audience thanks to the new ETF. A new chapter could be starting in the history of finance and investing.

Markets Panicked About Higher Rates. These Charts Suggest the Move Could...