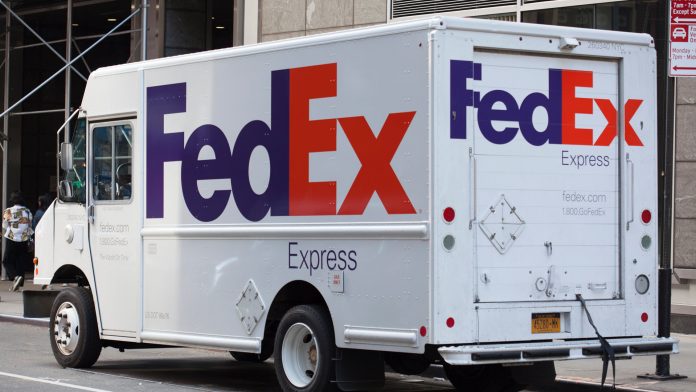 Big things are happening at FedEx, and one options trader is hedging against a small pullback.

A block of 1,280 June 235 puts were purchased yesterday in the delivery company for $3.99. A matching number of June 225 puts were sold at the same time for $1.25, resulting in a net cost of $2.74. Volume was above open interest at both strikes, which indicates he or she opened a new put spread.

The position’s value will expand to $10 if FDX closes at $225 or lower on expiration tomorrow. That’s a potential profit of 265 percent from the shares declining less than 5 percent. The strategy will expire worthless if the stock ends the week above $235.

It works because puts fix the selling price for a security. Investors can buy them to position for a decline or sell them to generate a credit. They can also combine buying and selling in vertical spread like Wednesday’s transaction. That effectively controls a move between two prices, often generating significant leverage relative to the underlier’s percentage change.

FDX rose 1.23 percent to $232.78 yesterday but was above $236 when the put spread occurred. It’s in the middle of a key week after the company bowed to pressure from activist investor D.E. Shaw by raising its dividend and expanding its board. Compensation policies also changed to reward executives based on share performance.

The stock responded by jumping more than 14 percent on Tuesday, its biggest one-day gain since 1986.

The rally occurred because the moves represent a historic transition at FDX after founder Fred Smith stepped down as CEO on March 28. The company’s acceptance of Shaw’s demands suggests other changes could follow. Could investors start to get excited about a company that’s drifted aimlessly for years? Will they also start to pay higher multiples on a stock trading for about 10 times earnings?

The put spread fits into these developments because it could be the work of a new shareholder seeking a hedge against a modest pullback.

Earnings are due next Thursday, June 23, after the closing bell.