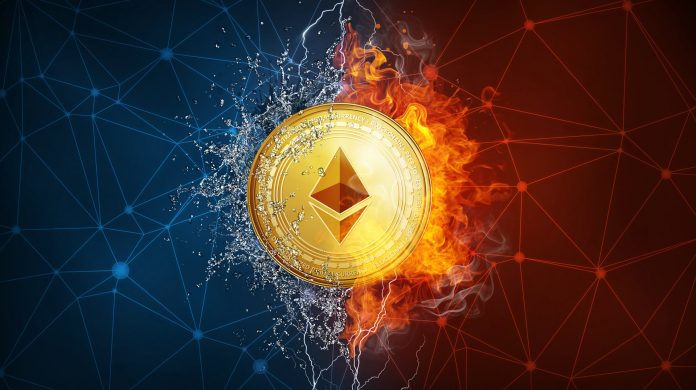 One week ago, Ethereum implemented an upgrade to control fees and limit supply. It’s already having an effect.

About 3 Ethereum are getting “burned” each minute, according to Etherchain.org. That’s more than 33,000 coins, or about $100 million. A separate analysis by ETH Burn Bot found that over 800 of Ethereum blocks have been deflationary, reducing total supply. (A new block occurs about every 15 seconds.)

While the total accounts for less than 1 percent of market cap, it demonstrates how EIP-1559 is already making Ethereum a scarcer asset. At the same time, demand has been increasing for the No. 2 cryptocurrency.

Decentralized finance (DeFi) and non-fungible tokens, or NFTs, are also fueling usage. The amount of value locked up in DeFi transactions has climbed above $80 billion from under $60 billion in late July, according to Defipulse.com. NFTs transactions have also hit a record of more than 60,000 per week. Both DeFi and NFTs, which manage ownership of intellectual property like art, utilize Ethereum’s network.

Investors are responding to these increased uses of Ethereum. Research firm OKLink estimated on Tuesday that only 9.4 percent of Ethereum is available on centralized exchanges, the least since early 2018.

Coinbase (COIN), the crypto trading platform that went public in April, gave more evidence of the trend in its earnings report this week. Twenty-six percent of its trading volume in the second quarter focused on Ethereum, versus 24 percent for Bitcoin. That’s a huge change from the fourth quarter, when Bitcoin accounted for 38 percent and Ethereum was 14 percent.

COIN also noted that institutional investors grew to 69 percent of volume last quarter from 64 percent in the fourth quarter. This marks a continuation of the institutional adoption wave. It’s also a big evolution from 2017’s retail-dominated bull market.

“Cryptocurrency and blockchain is exploding globally,” added Anton Ruddenklau of advisory giant KPMG. “Digital currencies and virtual assets are a big, big topic of conversation. I think for the rest of this year at least, crypto will be a very hot ticket for investors.”

KPMG said financial companies have more than doubled investments in crypto-related businesses so far this year. (The $8.7 billion total covers transactions like acquisitions of other firms, not purchases of assets like Bitcoin and Ethereum.)

Those figures show how far the cryptocurrency has come since Vitalik Buterin launched it on July 30, 2015. Attention in coming months will focus on the upgrade to “proof-of-stake.” That change will turn miners into validators who get paid based on the coins they hold, or stake. Fewer coins will be sold, transactions will process faster and electricity usage will plunge.

In conclusion, Ethereum has taken a big step toward the mainstream. Trading volumes, institutional interest and market capitalization show how far it’s come. Prices have pulled back following a big run and may face a period of digestion. However, recent news suggest the No. 2 crypto continues to develop. Longer-term investors may view its current pullback an opportunity.