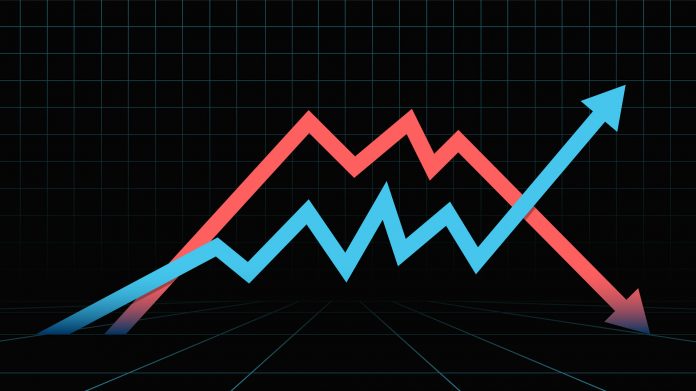 Sentiment has changed dramatically in 2021 as investors position for a surge of economic growth. This has caused some big pivots between former leaders and laggards. This post will break down some key trends.

First, the change can be explained by higher interest rates and higher commodity prices. This is stoking demand for “cyclical” companies like industrials and financials that benefit from more gross domestic product. Many of these companies struggled before the crisis and are now being rediscovered for the first time in years.

Second, the change can be explained by valuations. “Cheaper” companies trading at lower multiples are gaining. This isn’t a surprise because the rapid rise in bond yields makes higher multiple stocks appear more expensive.

Banks and financial stocks entered the pandemic still under a cloud from the 2008 subprime crisis. They spent years rebuilding but still remained below their old peaks from earlier in the century. That is, until last month, when the SPDR Financial ETF (XLF) broke out to new record highs.

The basic reasons are:

On the other hand, pharmaceutical stocks like Pfizer (PFE), Merck (MRK) and Amgen (AMGN) are sitting near lows despite failed breakouts in December. While each have their own stories, a bigger trend is deflationary pressure. Numbers from the Bureau of Labor Statistics show medicinal drug prices down about 2 percent in January. It was the first year-over-year drop since the data set begins in 2010.

Most readers know electric-car maker Tesla (TSLA) had an explosive 2020, ripping 743 percent over the course of the year.

They may be less aware that traditional auto stocks like Ford Motor (F) and General Motors (GM) have now risen more than TSLA on a trailing six-month basis. They also trade for less than 10 times forward earnings, compared with 125 times for TSLA.

CRM shot to new highs on the decision, but it’s gone downhill from there. Meanwhile, Oracle (ORCL) has quietly powered to new record levels.

It’s a huge upset in the world of software, because ORCL has been viewed as boring for years and CRM was the exciting disruptor. But that also caused a huge difference in valuations. CRM trades for 51 times forward earnings, more than twice ORCL’s reading.

Finally, “Big Box” retailers like Walmart (WMT), Costco (COST) and Target (TGT) soared to new highs last year. They benefited from a combination of “stay at home” and success in e-commerce.

That trend has reversed in 2021 with all three negative on a year-to-date basis. One obvious reason is that Americans will spend less on bulk groceries and related items after the pandemic.

Surging IT costs are another issue. That caused not only caused WMT to crash on February 19. It also threatened profit margins, inverting the standard business logic of investing now to make more money later.

TGT followed with a similarly ominous warning yesterday. Another $4 billion is going out the door to upgrade stores. (This follows $2.65 billion in spending last year.) Even with a blow-out quarterly report and surging economy, CEO Brian Cornell refused to provide guidance.

Remember, retail sales crushed estimates in January. The National Retail Federation separately forecast last week that sales would rise as much as 8.2 percent this year. Given all the good news for consumers and the economy, weakness in WMT, COST and TGT is especially surprising. It could mean the big names aren’t well positioned for the reopening.