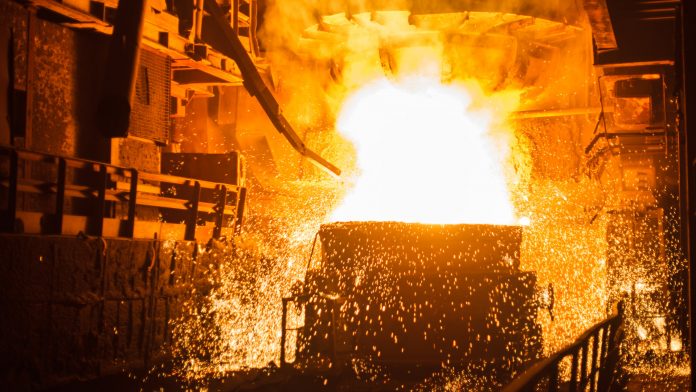 Steel stocks are flying as investors scramble to stay ahead of spiraling inflation.

The DJ US Steel Index ($DJUSST) surged 29 percent in February. It not only hit a 13-year high. It also outperformed the S&P 500 by a whopping 31 percentage points. That was its greatest relative strength since at least 2002, according to TradeStation data.

The breakout follows Russia’s invasion of Ukraine — and subsequent sanctions. Both countries are major iron and steel producers, while Russia is also a key player in metals like aluminum and nickel. However, the trend was taking shape even before the war broke out.

Data from the U.S. Producer Price Index shows iron and steel products rise 105 percent in November — the most in 94 years of history. (Increases have eased since, but were still up 68 percent in the most recent month of January.)

That kind of inflationary pressure has had a major impact on the stock market since November. It’s pushed up interest rates and hurt the high-multiple growth stocks that have dominated since about 2016. Investors have adjusted by piling into energy stocks and agricultural companies. Now metals seem to be following a similar trend.

Steelmakers are part of the broader industrial-metal group, whose members are involved in various activities. They fall under roughly three categories:

The recent surge in metal stocks could be important for a few reasons.

First, it follows more than a decade of underperformance. (See the at the blue line in the chart, which compares the industry against the broader S&P 500.) That kind of longer-term weakness suggests metal stocks aren’t widely owned by many large institutional investors, but now they may have entered an accumulation phase.

Next, new positions like these may have potential to grow if investors add in coming quarters. It’s also possible that more investors will enter the space, looking to follow the strong performance.

Third, industrial-metal stocks are largely pariahs from the big indexes. For example, NUE and FCX are the only members of the S&P 500 index. (X was removed in 2014 because its market cap had fallen behind other companies.) This can shield them from volatility in the broader market.

Fourth, metal stocks are economically sensitive, or cyclical. Strong economies, with lots of consumption and investment, use lots of metal. Autos, appliances, machinery and buildings all use steel. Copper is used for pipes and wires. This week brought more good economic news, with the Institute for Supply Management’s manufacturing index and ADP’s private-sector payrolls report beating estimates. It followed other strong readings last week. Will that trend also support industrial metals?

In conclusion, the stock market has evolved quickly as investors pivot from stay-at-home to inflation. They first targeted energy stocks, and now seem to be finding their way into metals.