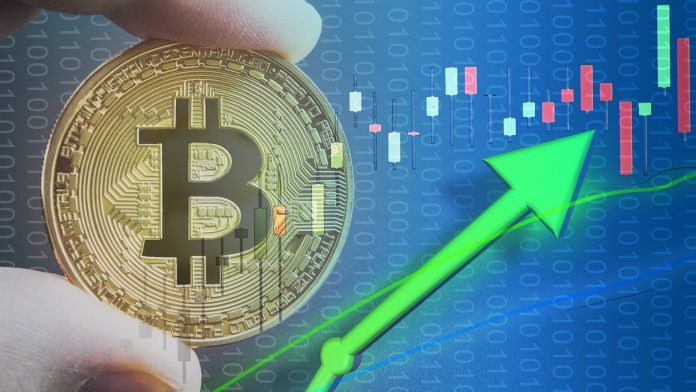 Jamie Dimon has been a major player at the Federal Reserve and run two of the country’s biggest banks. Now he’s the latest to jump on the cryptocurrency bandwagon.

CNBC reported this morning that Dimon’s bank, JPMorgan Chase (JPM), has started using its digital currency for commercial transactions. The announcement follows more than a year of development of the product, known as JPM Coin. Executives see the launch as a sign that blockchain technologies are finally going mainstream.

JPM’s not alone. This month has seen a broadening trend of “cryptocurrency adoption” as established and large companies enter the space. It’s driving Bitcoin (BTCUSD) to its highest levels in over a year, even as the broader stock market retreats.

The current adoption wave began on October 8 when Square (SQ) purchased $50 million of BTCUSD. It accounted for roughly 1 percent of the payments company’s total assets.

“Bitcoin has the potential to be a more ubiquitous currency in the future,” SQ said in a statement at the time. “As it grows in adoption, we intend to learn and participate in a disciplined way.”

The move represents a deeper move into cryptocurrencies by SQ, which let users purchase BTCUSD on its Cash App in 2018. It also fueled BTCUSD’s biggest rally since early August.

The next catalyst was China’s early implementation of a digital yuan. This would be different from decentralized cryptocurrencies like BTCUSD and Ethereum (ETHUSD) because it’s run by a central bank. But it’s similar because it uses a database to track ownership of money. Proponents think it could be smoother and less expensive than relying on banks and clearing houses for payments.

The government of Shenzen gave away about $1.5 million of the new currency to promote the initiative and encourage participation. There have been more incremental steps including changes to banking laws to support the effort. Alipay, owned by Alibaba’s (BABA) Ant Group, is also a big player.

The other big event came last Wednesday, October 21. That’s when PayPal (PYPL) enabled buying and selling of cryptocurrencies like BTCUSD and ETHUSD. It could potentially widen the universe of users because PYPL has about 346 million active users. That means less than 0.10 coin will ever be available to each of them, given its limited supply of 21 million.

The current wave of adoption follows Bitcoin’s halving event in May, which reduces the supply of new coins. It also comes after the rise of decentralized finance and the potential catalyst of Ethereum’s big upgrade. (That could also reduce supply, as we’ll cover in a future post.) Finally, mainstream money managers like Paul Tudor Jones and Michael Novogratz have recently endorsed cryptocurrencies, especially with low interest rates.

In conclusion, BTCUSD just had its highest weekly close since the week ended January 13, 2018, when its last bull run was ending. Today it’s on pace for its highest daily close since roughly the same time. Traders may want to watch it as this dramatic year draws to a close.

Bitcoin Plunges and Recovers Amid Halving

Market Pulse: Ethereum Is Trying Break out of a Bullish Triangle