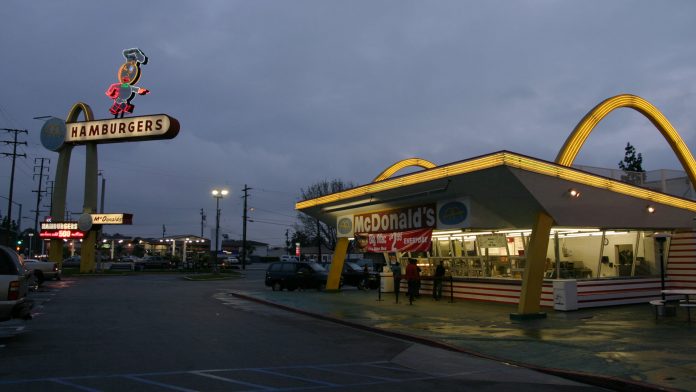 The coronavirus pandemic took a heavy toll on companies providing in-person services. This month’s mystery stock is no exception, although it’s made some big strides lately.

Like many great business sagas of the 20th century, its history began on the east coast and included a move west: The sons of Irish immigrants abandon New Hampshire for the shining lights of Hollywood, California, in the 1920s. They work odd jobs on movie sets and try to run a theatre before opening a successful hot dog stand in 1937.

They soon added hamburgers and relocated from Monrovia to San Bernardino. After a stint with barbeque, they decided to focus entirely on hamburgers in 1948. The change borrowed from mass-production practices of the time. Their menu would offer just six items, served fast in a clean and minimal environment. It was a radical redesign of the entire to business intended to maximize volumes and minimize costs.

Lots of hamburgers also meant lots of milkshakes, and that meant lots of Prince Castle Multimixer milkshake machines. The account executive servicing their restaurant marveled at their demand for his equipment and thought their model could thrive in other markets.

Richard and Maurice McDonald had already franchised a few locations in the Southwest. They were skeptical of Ray Kroc’s idea, but were willing to let him take the risk.

The 53-year old salesman had a unique understanding of changes sweeping the U.S. in the 1950s. He knew people were moving to suburbs and driving more than ever. He understood the power of centralized marketing, branding and planning. Looking to capitalize on these trends, Kroc opened his first restaurant in the Chicago suburb of Des Plaines in 1955.

From the start, his plan was to scale up rapidly. Instead of granting territorial licenses to entire cities (as was common at the time), he only allowed franchises one location at a time. He also imposed strict rules of standardization and quality to win a loyal base of customers. The next big innovation came when consultant Harry Sonneborn recommended buying the real estate used by franchisees. That made the parent corporation a bigger stakeholder in the individual locations. It also increased the potential to profit from success.

The McDonald brothers resisted Kroc’s new corporate vision but could do little to stop him. Wanting full control, he bought them out for $2.7 million in 1961. He took the company public in 1965. Its first international expansion took place two years later when McDonald’s (MCD) entered Canada. The Big Mac, created by Pittsburg franchisee Jim Delligatti, appeared in 1968.

More new products followed, like the quarter pounder in 1973 and the Egg McMuffin in 1975.

There were other changes as MCD shifted away from its early minimalist approach toward a friendly destination. Professional clown Willard Scott created the Ronald McDonald character in 1963. Some restaurants welcomed children with Playplaces and Happy Meals appeared in 1979.

The Hamburglar and Fry Guys were active by the time MCD joined the Dow Jones Industrial Average in 1985. The stock continued its ascent during the bull market of the 1980s and 1990s, powered by international expansion.

MCD has managed to survive by constantly adapting to changes in the market. In 2002, with people feeling poor after the dotcom crash, it engaged in price wars using the Dollar Menu. It later went upscale with the McCafe concept and higher-quality meats like Angus burgers. The most recent innovation before coronavirus was all-day breakfast.

While MCD hit new highs as early as October 2020, it mostly lagged other parts of the market. But the most recent quarterly results suggest some bigger positives are now emerging.

First, the pace of economic reopening in the U.S. is accelerating. Just today, for example, U.S. lifted its travel ban on visitors from over 30 countries. Scott Gottlieb, who correctly anticipated the severity of the disease in early 2020, sold CNBC on Friday that the pandemic will be over by early next year.

Next, MCD successfully raised prices last quarter to offset inflationary pressures. As investors have seen with other stocks recently, many companies now enjoy pricing power as cash-flush consumers return to an economy plagued by shortages. That let earnings beat forecasts by 11 percent despite revenue beating by less than 3 percent.

Finally, digital investments are supporting operations across the entire business. The Drive-Thru, one of MCD’s earliest strengths, could be its next battleground. Management has focused on this area for more than a year, seeing it as a key area where the company can distinguish itself against competitors.

MCD took another step on October 27 by announcing a partnership with International Business Machines (IBM). The goal is to create artificial-intelligence (AI)-powered Automated Order Taking (AOT) systems. That means you could soon be talking to a computer when you pull into the drive-thru lane.

While it may seem very new, such a disruption would be consistent with a long history of adaption and change. It would also be another example of MCD’s corporate headquarters innovating for the benefit of individual franchise operators, helping scale a single improvement across countless markets.

It’s also interesting because the economy is increasingly short on labor at the lower end of the income scale. AI-powered drive-thrus would not only save franchisees money. It would also make existing workers more productive. In addition, MCD’s position as a low-priced competitor makes it a potential beneficiary of rising wages for lower-income consumers.

In conclusion, MCD’s business of hamburgers and French fries might not be new. But it has constantly adapted with changes over eight decades — from the rise of the highway to the rise of the Latte.