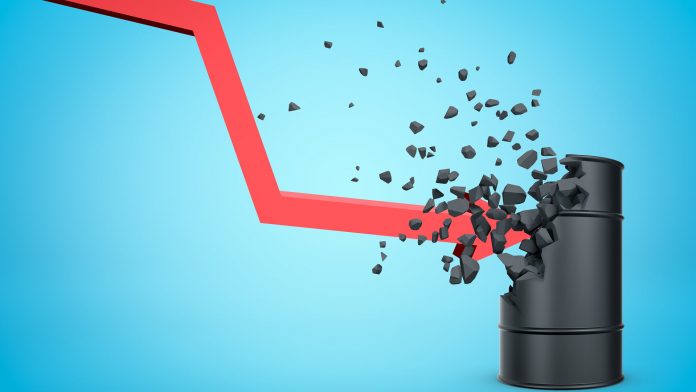 Energy stocks have rallied since November, but signs of exhaustion could be appearing.

Traders are focused on gridlock between Saudi Arabia and the United Arab Emirates. The two Middle East states have failed to agree on gradually returning crude oil to the market. While that news should be a positive for energy in the short-term, the bigger fear is that OPEC will lose its cohesion. If that happens, producers could reopen the spigots and the world could be awash in excess oil again.

There are also some potentially bearish patterns on the charts of crude oil and energy stocks.

First, crude oil futures made a higher high today and a lower low than Monday. That’s a bearish “outside” candle, which may signal a trend reversal.

Second, XLE is hitting a resistance level around $55 that runs all the way back to 2016.

Energy and the Fed

One implication for today’s price action seems bearish for oil and energy. No increase in OPEC’s production should be bullish, but instead traders are “selling the news.” That suggests most of the positives (a disciplined and united OPEC) are fading, while the longer-term negative (oversupply) is returning.

In conclusion, energy stocks have languished for years as the world grapples with an oil glut. Things improved during the pandemic because OPEC removed almost 10 million barrels of daily production. But the market seems to think all the good news is priced in as things return to normal. Traders may soon look for energy’s longer-term bearishness to return.

Oil and Gas Are Back in Focus as Winter Approaches and...