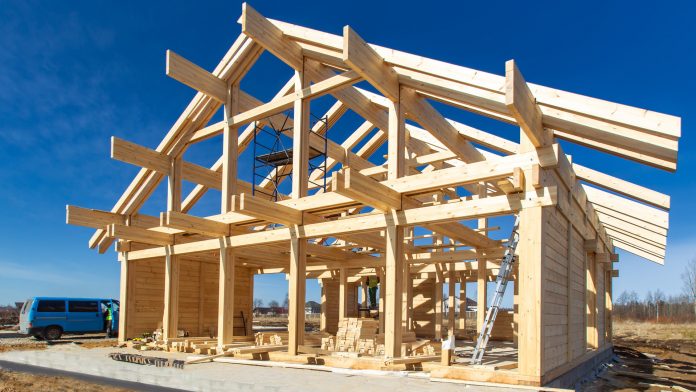 Housing stocks rallied in early 2021 as Americans scrambled for new homes. Now they pulled back dramatically as lumber prices tumble and mortgages get more affordable.

The chart below the Philadelphia Housing Index ($HGX) with the Stochastic Slow Indicator, a common measure of overbought and oversold conditions. It shows that $HGX is near the bottom of its range over the last 14 trading sessions. The chart also near an area where prices rallied and broke out in March. That could make some longer-term trend followers expect a bounce.

$HGX tracks a variety of companies with exposure to the U.S. housing industry: DIY chains like Home Depot (HD) and Lowe’s (LOW), builders like DR Horton (DHI) and Lennar (LEN), and suppliers like Sherwin Williams (SHW) and Masco (MAS).

As most readers probably know, real estate began the year with a bang as people relocated after coronavirus. Low interest rates and years of underbuilding added fuel to the fire. But the rally hit a wall seven weeks ago as rising interest rates and rising prices hurt demand. Builders also struggled with sky-high lumber prices and a shortage of labor.

Now there could be some signs of those conditions turning around. First, mortgage rates are lower today. That comes after a sharp drop in 10-year Treasury yields, which serve as a reference point for home loans. Mortgage applications also rose in the week ended June 16, their first increase in four weeks.

Lumber prices are down more than 40 percent from peak in early May. Copper, used for wiring, has also pulled back about 15 percent. This could potentially help construction, which in many places has been delayed by higher materials costs.

Major housing data points lag conditions on the ground by weeks and months. NAHB’s sentiment index, for example, is the most up-to-date number. It stood at a 10-month low in June after high prices scared away buyers. Other reports covering May, like housing starts, building permits and new-home sales missed estimates by a wide margin.

This may create opportunities for investors watching the longer-term trends. The most important number is the Monthly Supply published by the U.S. Census Bureau. It shows just 4.4 months of supply available, near the lowest levels since the early 1960s. The number of new homes being built (about 1.5 million annually) is also equivalent to the pace only 2001 — despite an entire generation of millennials entering adulthood since then. The overall population has also risen about 18 percent in that time, according to the United Nations.

We used tools covered in webinars like “Finding Leaders in Any Market” and “Making Sense of Fundamentals” to analyze housing stocks. Here are some names potentially of interest:

Home Depot (HD) and Lowe’s (LOW) are the two largest companies by market capitalization. They also average the most option volume, which could make them easier to trade with calls and puts. HD rose 24 percent between the start of the year and the May 10 peak, and has pulled back almost 10 percent since. LOW had almost an identical move.

DR Horton (DHI) and Lennar (LEN) are the two largest builders. Both stocks peaked at the same time as HD and are now bouncing at their 100-day moving averages.

Louisiana Pacific (LPX) rose the most before the pullback, ripping 68 percent through May 10, then dropping 22 percent. LPX supplies lumber and siding.

In conclusion, the underlying fundamentals of the U.S. housing market continue to favor builders because demand is strong and supply is limited. Stocks in the industry ran ahead of themselves through early May, but have now had considerable pullbacks. Meanwhile some conditions, like interest rates and lumber costs, have swung back in their favor.