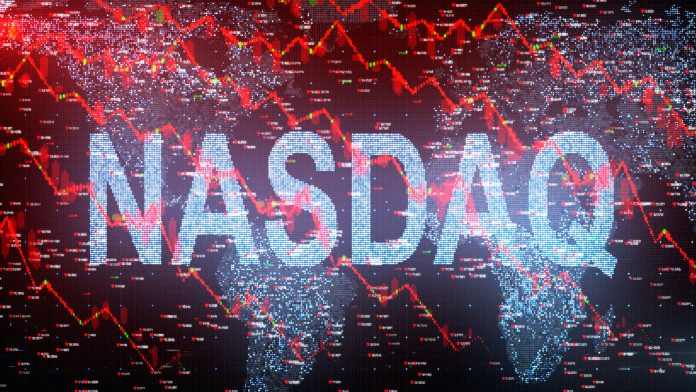 The selloff in growth stocks worsened last month as a perfect storm of rising rates, geopolitical risk and poor earnings hammered the Nasdaq-100.

The technology-heavy index plunged 13 percent in April, its biggest monthly drop since October 2008. Other benchmarks like the S&P 500 and Dow Jones Industrial Average had their worst showings since coronavirus spread in March 2020.

CME’s FedWatch tool shows that market expectations added 50 basis points of potential tightening in April. (The probable yearend range increased from 2.5-2.75 percent to 3-3.25 percent.) Those projections include a half-percentage point move this Wednesday as the Federal Reserve looks to quash the fastest inflation in 40 years. (See this story for more on why higher rates can hurt technology stocks.)

Amazon.com (AMZN) and Netflix (NFLX) highlight the problems beleaguering the Nasdaq. Both stocks were among the first to break out to new highs in April 2020 as investors embraced their stay-at-home business models. But that growth has ended, with an saturated streaming market causing NFLX to lose subscribers for the first time in over a decade. AMZN also reported an unexpected loss as aggressive growth sent costs through the roof.

“Our teams are squarely focused on improving productivity and cost efficiencies throughout our fulfillment network,” AMZN CEO Andy Jassy said on Thursday afternoon. He added that “this may take some time, particularly as we work through ongoing inflationary and supply chain pressure.” AMZN immediately plunged 14 percent, its sharpest drop almost 16 years.

While growth indexes led to the downside, value stocks also fell because of financials and industrials. Both are economically sensitive, making them less attractive to investors when the Fed is trying to slow the economy.

The American Association of Individual Investors also reported that 59 percent of respondents considered themselves “bearish” in the latest weekly survey. It was the highest reading since March 2009 (shortly before the market bottomed). Bullishness is also running at the lowest levels since 1992.

Last week’s 3.3 percent decline landed the S&P 500 back around the 4115 level where it bottomed in late February. The index is down about 14 percent from its all-time high early this year. Technical analysts will now probably watch to see if prices can hold their ground and turn these levels into support.

The Nasdaq-100, on the other hand, closed at its lowest level in over 13 months. Other indexes like the Dow Jones Industrial Average and Transportation Average have remained higher. Transports, in particular, may be providing a bullish signal because they’re still above last October’s low.

Bond yields could also be in focus because of the Fed meeting. Yields on the five-year Treasury note are near their 2018 high, but the 10- and 30-year Treasuries remain below the old peaks. Will rates continue to rise and keep pressure on the Nasdaq?

This week is dominated by the Fed on Wednesday, but there’s also more employment data and quarterly results.

The Institute for Supply Management’s manufacturing index is scheduled for morning. Expedia (EXPE), Devon Energy (DVN) and MGM Resorts (MGM) are some of the noteworthy companies with earnings due.

Tech Stocks Break the Downtrend Despite a Hawkish Fed. Are the...