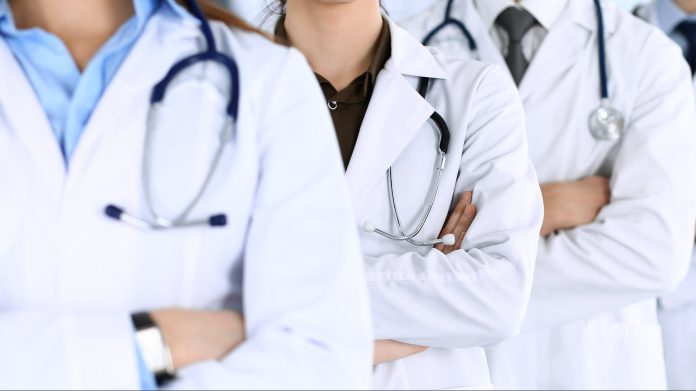 Stocks ended 2021 on a strong note as investors found opportunities in new sectors like health care and real estate.

The S&P 500 rose 4.7 percent in December, rebounding from worries about the Federal Reserve and omicron variant of coronavirus. The index climbed almost 11 percent in the final three months of 2021, its biggest quarterly gain since the market rebounded from the initial coronavirus crash between March and June of 2020.

Despite the ongoing rally, significant changes appeared beneath the surface. The Nasdaq-100, which led for most of the year, had its worst month relative to the S&P 500 (lagging by 3 percentage points) since November 2016. The weakness followed poor guidance from software companies like Salesforce.com (CRM) and Adobe (ADBE).

Healthcare, on the other hand, advanced 9.2 percent in December. Excluding April 2020 (when everything jumped), it was the sector’s best month since November 2009. The gain started as investors rotated toward safe havens, and gathered momentum after Oracle (ORCL) gobbled up Cerner (CERN).

The SPDR Consumer Staples ETF (XLP) jumped 9.6 percent, its biggest monthly gain since its launch in 1998. Real-estate investment trusts (REITs) rallied 10 percent. The worst performers in December were mostly cyclical sectors that benefit from a strong economy, like consumer discretionaries and energy.

Will the Fed Tighten?

Markets seemed to dismiss the news as omicron made some economists think the Fed will reverse course. This debate between strong economic numbers and doubts about the central bank’s new hawkishness could be important this month. In particular, investors could watch Friday’s non-farm payrolls report. After that, attention may focus on the Fed’s next meeting on January 25. Will Jerome Powell back down or push ahead with tighter policy?

The S&P 500’s chart has some potentially bullish and bearish features after hitting new all-time highs above 4800. The index had a small change last Wednesday, December 29, after testing higher and lower. That produced a so-called spinning top candlestick. The next session brought higher high and a lower low — a bearish outside day. Both are potential reversal patterns.

On the other hand, breadth has been improving. The advance/decline line rose to new highs (confirming the index’s rally). The equal-weighted index also had its best month relative to the S&P 500 since February. The change seems to reflect the trend cited above, with investors shifting away from high-multiple growth stocks toward healthcare, real estate and consumer staples.

Traders may additionally notice the series of higher lows since October, which could be forming a new trendline.

Energy and real estate were the top performers. The energy sector rebounded from its massive drops in 2020 but remains well below its pre-covid levels. Real estate, on the other hand, broke out to new highs as property values surged and the industry benefited from higher rents, e-commerce, wireless communications and cloud-computing.

Technology was split. Semiconductors, which benefit from the strong economy and surging demand, rallied more than 40 percent. But software companies, which trade at higher multiples, ended the year on a weak note. Payment stocks like PayPal (PYPL) and Square (SQ) also crumbled in the second half following years of outperformance.

Investors will return from the holiday to a busy week of economic news.

ADP’s private-sector payrolls report is on Wednesday morning. Crude oil inventories and minutes from the last Fed meeting follow later in the session.

Thursday is the only session with notable earnings: Walgreen Boots Alliance (WBA), Bed Bath & Beyond (BBBY) and Constellation Brands (STX) report before the opening bell. Initial jobless claims are also due, along with ISM’s services index (which hit a record high in November).

Following the House of Morgan on Fed day