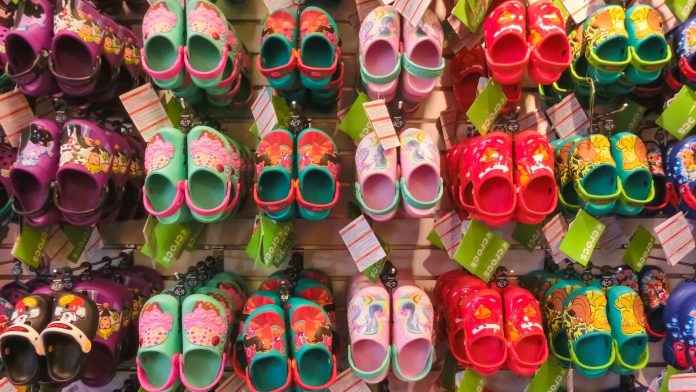 Many companies spend a fortune trying to achieve brand identity and customer loyalty. But that was never a problem for this month’s mystery stock.

Its story began early this century in Boulder, Colorado, where three friends had a concept for a new kind of footwear. They had encountered a plastic boating shoe on vacation in the Caribbean. It was made by a Canadian company specializing in injected foam products. The three friends spent about two years securing the rights and manufacturing processes, which they completed in June 2004.

The public was quickly enthralled by the shoes, which combined comfort with distinctive colors. Parents bought them for children because they were comfortable and easy to clean (even in a dishwasher). Celebrities like Adam Sandler and Al Pacino wore them. Some people liked them for being environmentally friendly, and others mocked them for their garish ugliness.

Management didn’t mind detractors because they knew that any publicity was good publicity. They even capitalized on it with an ad declaring that “Ugly can be beautiful.”

The company next focused on going public. It reincorporated in Delaware and co-founder George Boedbecker Jr. stepped down as CEO. In came experienced Silicon Valley executive Ron Snyder, who focused on expanding overseas and selling the company to investors.

Crocs (CROX) chose an ideal time to go public in February 2006, during the mortgage-fueled consumer boom. Wall Street embraced the deal, boosting the price by about 56 percent before shares hit the market. It surged an additional 36 percent on its first session, and proceeded to climb another 400 percent by October of the same year.

Then came the financial crisis and a long period of weakness for the company. By mid-2017 it was below its IPO levels. Management started buying back shares a big turnaround started shortly before coronavirus hit.

August 2019 was a key month. CROX had already weathered the storm of tariffs on imported goods and digital traction was taking hold. Quarterly results beat estimates and management raised guidance. They followed with another strong report in November and raised guidance again in January 2020. By now, the shares were back to their highest level in 13 years.

The coronavirus selloff hammered the stock, erasing about 80 percent of its value by mid-March. CROX rebounded along with the rest of the market and started impressing investors again in July, with e-commerce fueling growth at a time that shopping centers were closed.

The string of bullish news continued for the next four quarters, lifting the stock above its 2006 high early this year. All told, it rose 1,578 percent from its pandemic low to recent high.

The crash and rebound in CROX offers a few lessons for investors.

The first is that brand momentum can be a powerful force. Companies selling distinct consumer products can deliver significant outperformance when their business is on upswing. That’s especially true when their products are relatively inexpensive, because customers are less likely to flip to cheap competitors.

Second is the importance of business transformation. Last year was all about e-commerce and digital sales. Aware of the issues in traditional retail, CROX had already begun its migration to online channels. It profited handsomely, even outperforming dedicated Internet merchants like Amazon.com (AMZN) and Etsy (ETSY).

Third, bigger is often not better. Smaller companies often have larger growth potential than established firms because they have more potential customers and expansion.

In conclusion, the stock market is always full of opportunities and interesting stories. Keep reading Market Insights for more, including our next Mystery Stock in early September.