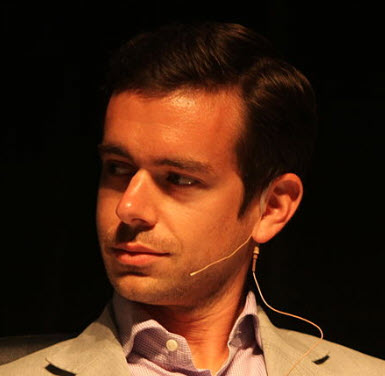 Technology’s all about change. There’s even change in the hottest CEO.

Sure Jeff Bezos of Amazon.com (AMZN) might be the richest man in the world. And, sure, Tim Cook of Apple (AAPL) may run the most valuable company. And sure, Mark Zuckerberg of Facebook (FB) is pretty loaded for a 34-year old. But recently, the hottest head honcho has been Jack Dorsey.

The RadarScreen® below compares the one-month performance of several well-known technology stocks. Notice that of all the big names, Square (SQ) and Twitter.com (TWTR) are thrashing their peers by a wide margin. Both companies were co-founded and are run by Dorsey. SQ closed at a new all-time high yesterday and TWTR had its richest price tag in almost three years.

The pair seem to have staked out key territory in the digital new economy. TWTR is the 12th busiest web site in the world, according to Alexa, but it wasn’t run like a solid business for most of that time. Only in the last few quarters has it started to show a turnaround, with big gains in user time, revenue and advertising engagement. To top it all off, yesterday afternoon S&P Dow Jones Indices said TWTR would join the S&P 500 index. That’s lifting social-media site stock 4 percent before the opening bell.

SQ never really had a period of weakness. The payments-processing company went public in late 2015 and drifted in a range the following year. Then it started running in 2017 amid a series of strong quarterly reports and hasn’t looked back. Last week, it excited investors even more by acquiring web-site developer Weebly. Investors clearly liked the deal, seeing potential for cross-selling and synergies with SQ’s small-business clients.

SQ and TWTR also beat revenue expectations both times they reported this year. And, both stocks seem to be following the broader cup-and-handle pattern that’s been popping up everywhere in the sector.

In conclusion, things change quickly in Silicon Valley. And now Jack Dorsey seems to be the newest rockstar to watch.