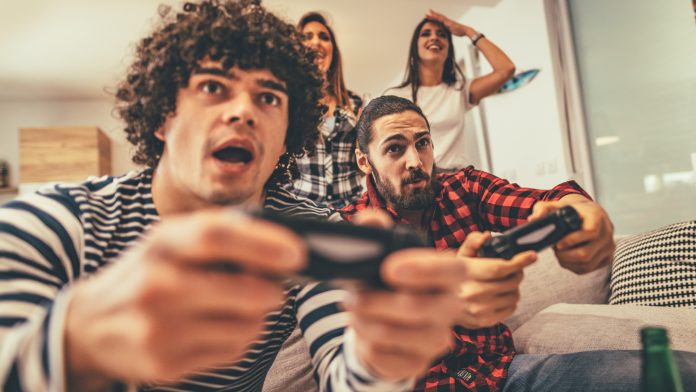 GameStop’s epic short squeeze is a stunning example of how quickly markets can change. A big example of this appeared on Google Trends.

This screenshot compares interest in GameStop (GME) and Tesla (TSLA) on Google Finance over the last seven days. A week ago, GME had relative interest of just 1, while TSLA was at 22.

GME gained steadily along with its stock price and overtook the $835 billion electric car maker an hour before the closing bell yesterday. As of this morning, its relative interest is 100, versus 34 for TSLA.

The same thing happened on the TradeStation platform. GME is the most popular symbol in the last week, while TSLA has slipped to third. Obalon Therapeutics (OBLN) is the No. 2 stock amid a merger-fuel rally.

Why Is GameStock Stock Going Up?

GME shares are spiking because it’s become popular with retail investors, especially Reddit users. Hedge funds have also shorted it, meaning they borrowed shares from other investors to sell. They hope to see it lose value so they can repurchase the stock at lower prices.

As of mid-January, short interest accounted for more than twice the available GME shares in the market. This can also trigger rallies because traders may buy stock to cover their bearish positions. This is known as a “short squeeze.”

GME has surged more than 1,700 percent so far this year. While no one can predict the future, gains of that size are highly unusual. Traders considering the stock should remember that that past performance is no guaranty of future results.

Why Is BlackBerry Stock Going Up?

BlackBerry, formerly known as Research in Motion, was a prominent technology stock between 2003 and 2008. Once known for its BlackBerry smartphones, the company now focuses on security software for businesses. It also had its own bullish catalyst on Jan. 14: potential legal settlements with Facebook (FB) after more than two years of patent disputes.

AMC operates about 1,000 movie theaters. It lost 71 percent of its value in 2020 after the coronavirus pandemic slashed revenue by about 90 percent. That negative backdrop caused short sellers to target the stock, putting it on the list for Reddit traders.

Bed Bath & Beyond started trending lower in 2015 as traditional retailers came under pressure. Coronavirus dragged it down even further, to new 25-year lows. However, BBBY began a turnaround as early as April by shifting to online sales.

Are You Ready? November 2019 Is a Huge Month for Streaming...

Bullish or Bearish, Growth or Value: This Video Explains How to...